Just a man and his horse, even in the country's 15th largest metropolis.

One of the many gorgeous spreads of fresh produce. 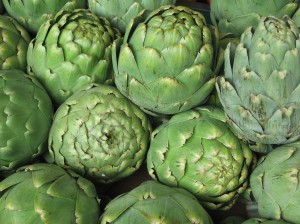 I don't think I've ever eaten an artichoke in my life, but as far as vegetables go, they are striking to look at.

The world's grossest tourist attraction: a wall of chewed up bubblegum outside Pike Place Market.

Metsker's Map shop downtown. I don't know--globes and antique maps just do it for me. 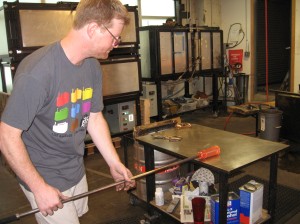 Blowing glass is a two person job. Tyler takes the rod and glass out of the kiln and his colleague bends down and blows into the opening. "Blow. Stop. Blow. Stop," is what Tyler says.

Those who live in Seattle say that it really doesn’t rain there as often as people think. And granted, I’ve only ever been to the Emerald City twice in my life, so I don’t have a huge basis for my opinions on the weather. But really, Seattleites? It rained both times I was there. And I read somewhere that the nickname “Emerald City” comes from the lush evergreens for which the area’s known. And that lushness comes from rain. In fact, it rained so much while we were there that Brian’s friend who we stayed with, who went jogging late Saturday morning, came back with blood streaming down his shirt because the cotton fabric, which was soaked all the way through and had rubbed against his skin as he bounded down the city streets, had chafed his nipples. When he walked in the front door I noticed it straight away. But I didn’t say anything. Maybe his t-shirt had been stained for some time. And what place of it was mine to point it out? But as we sat at the kitchen table drinking coffee, the stain got worse, and the blood became more pronounced. Right around the nipples.

Despite what locals tell you, it turns out that it rains so much in Seattle that it causes people’s nipples to bleed. I encouraged him to put band-aids on them–like girls do when they go to the prom and don’t want to spend money on a strapless bra. But I think he just let them dry out. I don’t know. I’d only met him one other time–when we were both in Bozeman and met up at a bar. So I didn’t want to cross the line and belabor the whole thing.

Although I’ve never felt much allegiance for the Pacific Northwest in the Lower 48, I feel like it’s tough to dislike a place that has such uniquely inclement weather, where people still carry on with their ordinary actions. It’s commendable, really. If I lived in Seattle, I think I’d just watch movies and drink coffee all day, in my pajamas. But when I did venture out, I’d make certain I had on my bra. I don’t know–maybe guys should do the same thing. 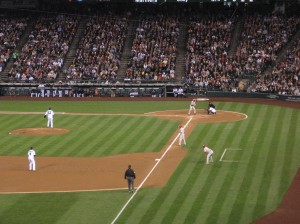 Trying to get a freeze frame of heartthrob Chase Utley at bat.

The horse races at Emerald Downs, where I learned to be a pretty good better.

This entry was posted on Saturday, July 9th, 2011 at 1:46 pm and posted in Uncategorized. You can follow any responses to this entry through the RSS 2.0 feed.
« cloverland morels