A handful of morels we found along the trail, which I cooked a couple nights later with a great cut of steak

The campsite for the night, up Cloverland grade, near Umatilla National Forest

A humble meal of broccoli and cheese rice with brats 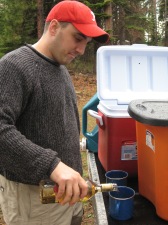 Getting down to business with the margaritas

In trying to get to know our new surroundings, I ventured into the Snake River office, across the river in Washington, and asked the woman in charge about nearby camp sites. Everything in the Clearwater, near Orofino, was still eight inches under snow, and the Dworshak Reservoir area was the same. In getting into Hells Gate (the deepest river gorge in the country, and right outside our front door), you either have to take a boat, because the canyon’s inaccessible by road or, as far as I could tell, drive into Oregon. We don’t have a boat, much to my dismay, and we didn’t want to drive to Oregon. We just wanted to get out somewhere, relatively simple, and see the wilds, forgetting about domesticity for a night.

“You really can’t get into Hells Gate from here?” I said.

“Not unless you have a boat, or can talk one of these guys into taking you on theirs,” the office lady said.

She pointed her chin at two men sitting nearby, who she’d been having a chat with when I walked in. She was kidding, I think, but one of the guys, who I later considered the first friend I made in Lewiston, ended up bestowing upon me the combination code for his gate, where he owned a nice chunk of land, that he said we could camp on. The other guy, ornery but generous with his time, drew me a map he called the map of all maps, while still insisting that we’d get lost.

I’m not going to say that we found the place on our first try, but we did find it. Outside Asotin, up Cloverland grade, on top of a plateau of wheat fields and barns, near the mountains of Umatilla National Forest.

I hadn’t been camping since last summer, and at first I forgot the drill. I looked around and didn’t know what to do. I thought about pouring a margarita, but I was in some state of stasis, where opposing forces kept me from moving forward. I thought about reading my book–Jim Harrison’s Dalva–but I didn’t feel like sitting still and burying my nose in something. I looked around, and then up at the sky, and that dictated what we’d do, or not do.

They were the kind of clouds that seem pregnant with rain and turn dirt roads into impassable bogs of mud.  I thought about the time I went camping with an old friend, in Utah’s Escalante. On our drive in, down a dirt road with ruts that seemed to sink into a netherworld, the sun fashioned a clear as day sky. That next morning, the sky looked as if it had aged thirty years, just overnight–it was bleak and gray and lined with clouds, and it had turned the ground into a wet, mucky mess. The little Toyota that I drove, even with all-wheel drive, was stuck like nobody’s business. For two full days it stayed stuck.

After thinking back on this, Brian and I had a quick conversation about whether we wanted to stay or go. But who are we to retreat? So we hustled to set up our tent and rigged a tarp for a cooking shelter. It was all coming back to me–the camping routine. There’s something different about the chore of setting up a tent and cooking outside, compared to making up my bed at home and throwing together dinner in the kitchen. Camping requires a kind of ingenuity and resourcefulness different from the rote routines of daily life. And that’s what makes it so rejuvenating. You no longer feel like Martha Stewart, minus the prison adventure. You feel like Martha Stewart having escaped from prison, doing your best to survive in the rugged terrain of western Washington.

The rain started as soon as we had the tarp up, and that’s when I poured a margarita. Then I cooked some bratwursts, along with a side of broccoli and rice. The rain let up, then–just long enough to go looking for morels, which we found, in modest abundance, along a nearby trail. When we got back the rain came on again. So we positioned the fire pit near the tarp, found some dry wood, and with night settling in, lit a blaze. We sat by the fire and warmed up. We roasted marshmallows. We drank some more margaritas. The rain didn’t let up this time. It continued into the night. By that point we didn’t think about turning back, because we’d committed–past the intimacy and past the passion.

This entry was posted on Wednesday, June 15th, 2011 at 9:59 pm and posted in Uncategorized. You can follow any responses to this entry through the RSS 2.0 feed.
« truckin’ down the ALCAN
seattle men might consider wearing bras »