I made it back to Cordova, by way of Valdez and the thorny Thompson Pass, for work the following summer.  It rained off and on the entire time we were there, up until our day of departure. But I still fantasize about the place. I LOVE that little fishing town. We stayed five nights at the employees’ quarters inside the confines of Merle K Mudhole Smith Airport, and while that lodging won’t make the Five-Star Alliance list any time soon (another DOT worker–a heavy equipment mechanic from Valdez who also stayed there–seemed to like it just fine, though), the foreman more than made up for our dismal living arrangements. He gave us a grill to use; allowed us free range of the freezer where he’d stocked salmon, moose, and bear meat; and invited us to his home to take a ride in his skiff for a little rod and reel action. When we arrived, he had a smoker (in use and full to the brim with sockeyes), a revved-up sauna, and an unbelievable riverfront view of the Copper in its bluest-greenest form. He offered us a steam, and said that the next time we were in town, we should track him down for some halibut fishing in the sound. He’s the reason I wish I lived there.

Off Whitshed Road near Hartney Bay, where we were collecting data for the DOT, we saw black bears every couple miles gorging on quarter-sized salmon berries. On the road along Eyak Lake, we saw hundreds of sockeye salmon–you could even see bright red masses out of the corner of your eye while driving–most of which had just spawned and were dying. Eyes falling out, missing fins, scales coming off. In the middle of the road where we stood lay the skeleton of a sockeye, and about ten feet away was a big pile of shit. Given that we were in bear country, and if I were a bear I’d be hanging out around a bunch of dead fish that allowed for an easy meal, we concluded that a large, hungry grizzly was nearby. But we never saw it.

On our day off we drove out to Child’s Glacier and saw huge blocks of glacial ice fall into the Copper River, causing cannonball effects 150 feet tall, then waves, which didn’t materialize until a minute or so later, whose crests were 10 feet tall. Standing on the shores of the river, I feared for my life.

It was a long trip back from Cordova to the Interior. What made me happy to be home was the burger I got in Delta Junction for dinner, right at the end of our journey, from the Buffalo Drive-In–hands down my favorite place to eat in Delta. Although still in the middle of nowhere, I felt like I’d returned to civilization. We drove the last leg of the Richardson Highway, past Tenderfoot and miles of birch forests and the Tanana, and arrived. The indelible smell of rusted metal from water-logged Cordova clung to my hair and clothes. For days, there was no getting rid of it. It was the essence of the dirty, natural beauty of the place.

The remnants (a fish head) left by a nearby grizzly

The rest of the remnants, just a few feet away 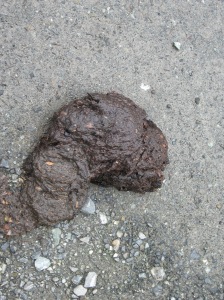 This entry was posted on Wednesday, May 4th, 2011 at 10:52 pm and posted in Uncategorized. You can follow any responses to this entry through the RSS 2.0 feed.
« to the sea
the calm before the storm »